Summer is the season for noctilucent clouds, and they have already been appearing to observers in the UK. When water vapour enters the mesosphere due to upwelling of moisture in summertime, dust sticks to the vapour and forms the eerie blue wispy clouds seen high in the atmosphere.

As June succumbs to July, we get our last glimpses of Jupiter before it begins to set with the Sun. But as Jupiter disappears, Mars and Saturn replace the King as the planets to watch.

On July 5 after sunset in the southwest, reddish Mars will be less than one degree to the upper right of the Moon. The bluish point to the Moon's left is Spica, a bit more than three degrees away. Over the course of the night, the Moon will slide to the left, positioning itself between the red and blue lights. Mars, the gibbous Moon, and Spica will set after midnight. 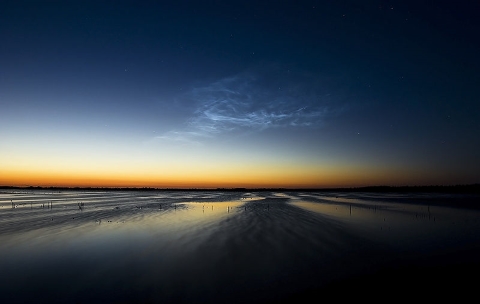 Noctilucent clouds as seen over the Netherlands
Credit: Hrald

On July 7 after sunset, the Moon is a little more than one degree below Saturn. Use a telescope to easily spot Saturn with its rings and largest moon Titan, our Moon and its craters, and the wonderfully named Zubenelgenubi to the Moon's right. This double star, also known as Alpha Librae, shows both of its components through a telescope.

July, August, and September all have Full Moons close to perigee, when the Moon is closest to Earth. However, August has the two events coinciding the closest, so it wins the title of Perigee Moon, or "Supermoon" as the media often states. The Moon's closest point to Earth for July occurs less than 24 hours after Full Moon. Full Moon is at 11:27 GMT on July 12, with perigee occurring on July 13 at 8:28 GMT.

For a telescope observing challenge, on the first nights of July you can try to spot two asteroids as they pass close by each other. It's best to look on a series of nights so you can see which objects move against the background stars. Starting on July 1, find Vesta, at magnitude 7.1, and Ceres, at magnitude 8.4, less than a degree apart. The pair is easy enough to find with a little star-hopping. First find Mars, the reddish point of light in the southwest in the constellation Virgo (not far from the bluish star Spica, which is a bit dimmer). Look about 10 degrees above Mars to the first bright star you see, which is named Heze. (The width of your fist from top to bottom held at arm's length equals about 10 degrees.)

Using a telescope, put Heze at the top of your field of view, and you should be able to see Ceres and Vesta at the bottom of the field of view. (Keep in mind that the view through a telescope is inverted, so through the eyepiece Heze goes to the bottom and the asteroids will appear above Heze.) Ceres is just a bit dimmer and bit to the upper left from Vesta. Because there are stars of similar magnitude in the same field of view, you must sketch what you see and come back over the next couple nights to find the asteroids slowly moving against the background stars and nearly brushing right past each other on July 11 when they are three arcminutes apart (Ceres will be above Vesta).

Comet Jacques is close to the Sun in June but may emerge in July as a decent viewing target for amateur astronomers. The comet will be entering Taurus on summer mornings. As we get closer to its swing around the Sun we will have a better idea of how much Comet Jacques is brightening. Look for blog updates to find out how Jacques is progressing. 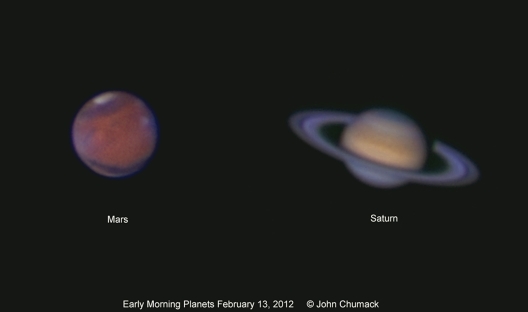 Mars and Saturn get close this summer.
Credit: John Chumack

On August 3, the Moon is between Saturn and Mars for a photographic opportunity. The planets will continue to move closer over the course of the month.

The Perigee Moon, dubbed the Supermoon by popular culture, occurs on August 10 when the Moon reaches perigee (its closest point to Earth) only 22 minutes before it hits full phase. While your friends will be using the buzzword "Supermoon" on this night, you can tell them that it's the coincidence of perigee with a syzygy that brought about the Supermoon. Syzygy is an alignment of three bodies, including Full Moon or New Noon, along with transits, occultations, and eclipses. This perigee-syzygy concurrence will also lead to an amplification of the tides. The moment of Full Moon is August 10 at 18:11 GMT.

On August 18, just before sunrise, you can try to spot the closest planet-planet conjunction of the year as the two brightest planets, Jupiter and Venus, appear 0.21 degrees apart. The planets will rise in the east-northeast just a bit before the Sun.

Mars passes below Saturn from August 22 to 25. The two planets are shining at the same magnitude. On August 31, the Moon will make a lovely triangle with Mars and Saturn as they continue to separate and Mars moves off toward its rival, Antares. Mars, the God of War, is known as Ares in Greek mythology, and the reddish star that rivals it was therefore named Anti-Ares, or Antares. It's not until the last day of September that Mars passes Antares. As they lie about three and a half degrees apart in Scorpius, Mars will be the brighter of the two at magnitude 0.8 with Antares at magnitude 1.0. September 29 showcases the Moon above the red duo.

The most prolific meteor shower of the summer is the Perseid meteors, which will be at their best between August 10 and 13. Unfortunately, the Supermoon rises on August 10, washing out many of the fainter meteors. Trying looking the following nights in the opposite direction of sky from the Moon.

Try to spot Mercury on August 27 in the west just after sunset. It will be directly to the right of the crescent Moon. Mercury skims the horizon in September, appearing near the star Spica on September 20. The Sun's glow may keep you from seeing the objects through the fading light. Mercury is better seen by those in the Southern Hemisphere as it will rise higher from the horizon than for those in the North.

The end of September brings some good photo ops with the Moon and planets. On September 27, a crescent Moon is near Saturn. On September 28, the Moon splits the difference between Mars and Saturn, and on September 29 it has moved on to Mars. 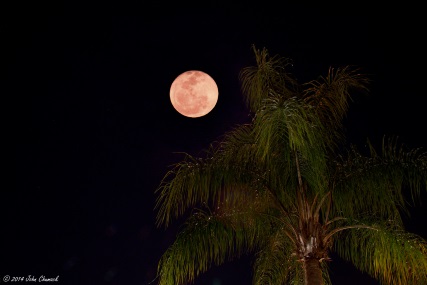 A great time to view Saturn through a telescope is during opposition.
Credit: John Chumack

If you're confused by any of the astronomy terminology used on this page take a look at our: explanation of astronomy basics. Also, do visit our section on CCD Imaging to see what other amateur enthusiasts have managed to capture with their equipment. If there are any amateur astrophotographers out there who would like to exhibit their images on Astronomy Today do contact us.

back to the top