GAIA: Europe plots a Billion!
Ever since the Greek astronomer Hipparcos first plotted the position of the stars, European astronomers have been at the forefront of astrometric measurement. The most recent achievement was the aptly named Hipparcos satellite launched by the European Space Agency (ESA) in 1989 and which, during its 4 year lifespan, plotted the position of a 100,000 nearby stars with unparalleled precision.

Now ESA is going to even greater heights, literally, with plans for an ambitious mission called GAIA which aims to plot the position, brightness and motion of a billion of the brightest stars in our galaxy. The ESA approved GAIA, named after the Earth Goddess, as one of its key cornerstone missions and the 5 year long mission began with the launch on 19 December 2013.

Unlike Hipparcos, the 3-ton GAIA spacecraft will not be in orbit around the Earth but will instead be hoisted towards the L2 Lagrangian point, held in place by the balanced gravitational pull of the Sun and Earth. Once boosted, using Europe's heavyweight Ariane 5 rocket, to its lofty perch 1.5 million kilometers out from Earth, the spacecraft will begin its stellar survey using its twin 1.7m diameter telescopes. 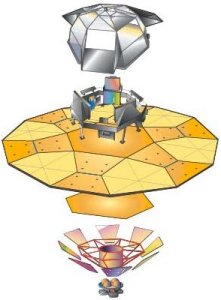 The method used by GAIA to compile its billion star catalogue will be measurements of stellar parallax, which is the apparent angular movement of a star in the sky when observed from opposite sides of the Earth's orbit around the Sun. GAIA will make these measurements with astounding accuracy, up to 10 microarcseconds (about 3 billionths of a degree) due to its stable position in space and the freedom from distortions induced by the shimmering atmosphere of Earth. Such accuracy will allow astronomers to compile the most detailed 3-D model of the distribution of stars in our galaxy ever obtained.

Yet there is more to GAIA than just measuring the position of stars. The photometric detectors used by the spacecraft's telescopes will also measure the brightness of the stars in up to 18 wavebands. The spacecraft will also study the amount of redshift or blueshift of the light to assess the rate at which the star is approaching or receding from Earth. These measurements will reveal many of the essential properties (e.g. age, mass, true luminosity) of the stars allowing astronomers to refine theories of how stars evolve.

GAIA will also detect subtle changes in the brightness of stars and small wobbles in their position. Such variations may reveal the presence of extrasolar planets passing in front of the star, blocking its light, or by pulling on the star as they orbit. It is thought that up to 30,000 new worlds may be detected. GAIA will also look at objects much closer to home with astronomers expecting the instruments to detect up to a million asteroids and Kupier Belt objects during their survey of the sky.

GAIA will open our eyes to the galaxy we live in, its birth, life and future, through the study of its component stars and will revolutionize our understanding of the Milky Way.

Latest Mission Info
Weighing 2000 kg, GAIA launched on 19 December 2013 aboard a Soyuz-Fregat. GAIA will measure stellar velocities (both radial and positional) throughout the Local Group to create the most accurate 3D Milky Way chart and will stringently test general relativity and cosmological theories using its gargantuan bytes of classified information.