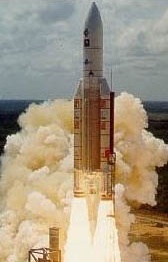 The Ariane 5 rocket is a heavy lift launcher used to launch commercial satellites and ESA science projects into space.

Ariane 5 Propulsion
Using a limited number of engines, Ariane 5 has a simple yet robust architecture. The vehicle consists of a main cryogenic core stage, two solid booster stages, and an upper stage.

The Solid Booster Stage
Taller than the MCS, the two solid boosters deliver more than 90 percent of the total launcher's thrust following liftoff.

Ariane 5 Payloads
Arianespace, which assembles the rockets, has developed a full range of payload adapters, fairings, and dispensers to accommodate all kinds of payloads.

The Internal Structure for Dual Launches (Sylda 5)
Sylda 5 enables dual-payload missions, accommodating satellites with a maximum height of 2.9 to 4.4 meters.

Ariane 5 Payload Fairings
The exceptionally large payload fairings enable Ariane 5 to launch all satellites currently in service (as well as those in development).

Ariane 1 first flew December 1979, and the eleven Ariane 1 flights successfully placed 14 payloads into geostationary orbits. Its payload capacity was 1800 kg. By January 1982, when Ariane 1 had flown only four times, the next three programmes had already been approved by the ESA.

Ariane 2 had the same launch configuration as its predecessor, though lacking the strap-on boosters. It first flew May 1986, yet it only launched six times and unloaded a total of five payloads, with a payload capability reduced by 5000 kg from its predecessor.

When the Ariane 4 was created, six versions of the launcher were available. Its updated core launcher could be equipped with solid, liquid, or mixed strap-on boosters. Its payload capability, 100 kg more than twice its predecessor's, Ariane 4 first flew June 1988. When it finally retired February 2003, Ariane 4 flew 116 missions, delivering 182 payloads to outer space.

The next version, Ariane 5, launches dual combinations (e.g. telecommunication satellites), though with a payload capacity enabling payload launch of any weight or size. It also follows in the Ariane 4 footsteps as a cost-efficient commercial payload-launching machine. On July 4, 1996, its maiden voyage ended in failure attributed to computer error. However an Ariane 5 rocket successfully launched the Rosetta probe on March 2, 2004. Ariane 5 is the current launch vehicle and is expected to remain in use until at least 2015.

The Ariane launch facilities are known as the ELA. The first ELA was built for the Europa vehicle and then used for Ariane 1, 2, and 3. After dormancy since July 11, 1989, ELA-1 launched Vega in 2007. A third ELA launch facility ELA-3, that launches the Ariane 5 series, is also located in French Guyana.