Eclipse of Lawrence of Arabia (1917 CE)
During the First World War, Thomas Edward Lawrence, known as Lawrence of Arabia, advised the Arabs in their revolt against the Ottoman Empire. One of his greatest exploits was the capture of Aqaba, a fortified port on the Sinai Peninsula, with a small troop of 50 Bedouin. In the Seven Pillars of Wisdom, he reports a lunar eclipse in Egypt that helped him overcome the first defensive position, Kethira: 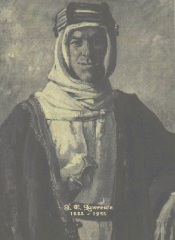 "By my diary there was an eclipse. Duly it came, and the Arabs forced the post without loss, while the superstitious soldiers were firing rifles and clanging copper pots to rescue the threatened satellite."

Aqaba was taken a few days later. Thanks to this strategic port having fallen to the British, the Allies soon recaptured Jerusalem and Damascus. The Turkish soldiers had another reason to fear the eclipse: according to an Islamic tradition, the Day of the Last Judgment is linked to an eclipse in the middle of the month of Ramadan, and this was precisely the case on that date.

Einstein Eclipse (1919 CE)
One of Einstein's greatest contributions to science was his General Theory of Relativity (GTR), formulated between 1913 and 1916. This revolutionary theory contradicted Newton's and provided fundamental new understandings of time and space measurement. GTR was difficult to understand though and, in order to be accepted, it was necessary that Einstein's theory predicted or explained some observed phenomenon that the Newtonian theory could not. Eddington came up with the idea that a total solar eclipse would provide a unique opportunity to quantitatively test Einstein's theory. How? If it was correct, the light from stars would be bent by the strong gravitational field of the Sun. And what circumstance was necessary to observe this? Totality and stars appearing close-by because the test required several bright stars close to the limb of the Sun during the eclipse. The eclipse of May 29, 1919 CE, offered such conditions.

The eclipse in Sobral, Brazil, 1919.
The large city of Sobral in Ceara, Brazil, as it was in 1919, and a recent monument to celebrate the eclipse.
Source: Sociedade Brasileira de Fisica.

The path of totality crossed Brazil, in South America, and Principe, an island owned by Portugal, just to the north of the equator and 150 miles from the African coast. In northeastern Brazil, the city of Sobral was the best post of observation of the phenomenon and two expeditions of American and English scientists joined the Brazilians to observe the eclipse.

Their purposes were distinct. The Brazilian commission focused on studies of the solar corona, its form and shape, and performed spectroscopic analysis of its constitution. The English wanted to verify experimentally the consequences of GTR. After analysis of the eclipse results, royal astronomer Frank Dyson announced, in November 1919, that the results confirmed the theory and it was made public: Einstein was right! In fact, what provoked such commotion was precise measurement of the deviation of starlight passing close to the Sun. The value of such deviation agreed with the prediction of Einstein's GTR (1.75 arc seconds), but was almost double the value predicted by Newton's gravitational theory (0.87 arc seconds).

This confirmation of the deviation of light is one of the most dramatic events in the history of science. It was front-page news around the globe. The London Times featured the headlines, "Revolution in science. New theory of the universe. Newtonian ideas overthrown" and The Washington Post, with "New theory of space: has no absolute dimensions, nor has time, say Savants". Although people were still mystified by his theory, his worldwide popularity increased dramatically almost overnight. Einstein was also very charismatic and became famous for his equation E=mc2. The fanfare that followed the eclipse contributed substantially to Einstein's popularity as a legendary scientist.

Eclipse of End of Millennium (1999 CE)
Stories about the end of the world have always frightened people throughout history. An eclipse of the Sun in the last year of the millennium would be the perfect scenario for commotion about this issue. One key ingredient for the August 11, 1999 eclipse was related to the forthcoming millennium, including predictions of catastrophes.

First Eclipses of the Third Millennium (2001 CE)
The first eclipse of the third millennium happened on January 9, 2001. This was a lunar eclipse that was total as viewed from most of Asia, Africa, Europe, and the eastern seaboard of North America. In Nigeria, the eclipse caused great consternation, and its advent was blamed on sinners. In the northeastern part of the country, there were rampages by gangs of youths. Similar destruction occurred in other towns. "The immoral acts committed in these places are responsible for this eclipse," explained one of the leaders of the riots.

Five months later, on June 21, 2001, the first total solar eclipse of the third millennium was also witnessed in Africa. As the track passed over Angola, Zambia, Zimbabwe, Mozambique, and finally the southern part of the island of Madagascar, thousands of tourists watched the spectacle, along with millions of local inhabitants. Elsewhere much wailing and gnashing of teeth accompanied what was considered the "rooting of the Sun", from which the world would never recover. The world did recover of course, quite promptly, and here we are waiting for the next meeting between the two celestial bodies in their marvelous space ballet.

Eclipse seen from space (2006 CE).
The image below, obtained from the International Space Station, 230 miles above the planet, was positioned to view the umbral shadow cast by the Moon as it moved between the Sun and Earth during the solar eclipse on March 29, 2006. 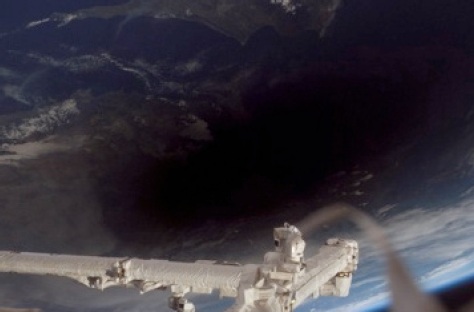 Eclipse in outer space. The Moon's shadow passing over the Earth during eclipse.

The astronaut image captures the umbral shadow across southern Turkey, northern Cyprus, and the Mediterranean Sea.

People living in these regions observed a total solar eclipse in which the Moon completely covered the Sun's disk.