Total Solar Eclipse of Louis XV (1724 CE)
The last total eclipse of the Sun visible in Paris occurred on May 22, 1724 CE. The young King Louis XV, at the time fourteen years old, observed it. The path of its shadow, very similar to the eclipse of August 11, 1999 CE, shifted southwards, and crossed England, France and Germany. It was carefully calculated and mapped, and painters depicted scenes of the crowds of spectators. 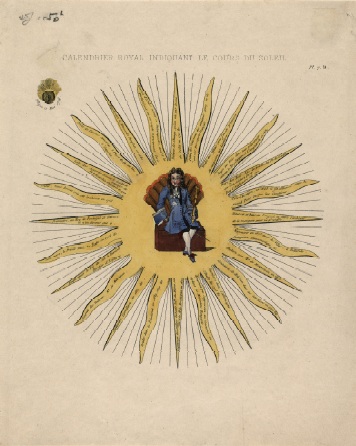 Print shows Louis XIV sitting on a box with fan-shaped back in the center of a Sun.
The numerous rays of the Sun document indignities attributed to the King between 1667 and 1705 as well as the eclipse of May 12, 1706.

Nat Turner's Eclipse (1831 CE)
The greatest slave revolt in North America was led by Nat Turner (1800-1831). The clever Turner learned how to read with his master's son - an undesirable skill from the masters' viewpoint for a slave during these times due to fear of rebellion. Turner, afterwards, dedicated himself to religion and became a preacher for his followers (Schaefer, 1994). In 1828, he had a vision: he would lead his people to liberty, but he should wait for a sign from God - and it came from the sky. 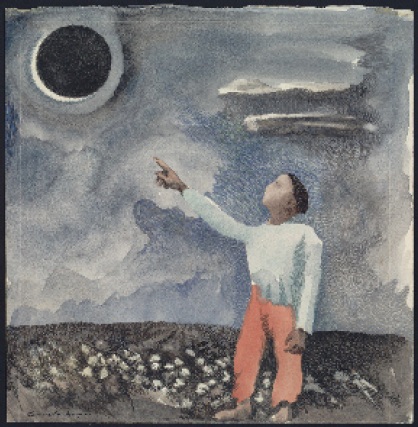 Nat Turner points at a lunar eclipse.
He foresees the rebellion that will take place with the eclipse of the Moon.
Credit: Bernarda Bryson.

An annular eclipse of the Sun occurred on February 12, 1831. Turner saw it as a 'black angel' occulting a white one - the time had arrived for blacks to overcome whites, so it was the right moment for rebellion. Several months later, after having murdered his original masters, Turner and his band of insurgents headed for the small town of Jerusalem where militiamen promptly interrupted their march. Most of the slaves, including Turner, went into hiding for seventy days before being taken to the gallows and hanged. Many people died in this revolt, and in no other episode have so many slave owners perished, a reason why many consider Turner to be a hero of the resistance to oppression against black people in the United States.

Adams' Eclipse (1851 CE)
The total solar eclipse of July 28, 1851 CE, was the first subject of an eclipse expedition. The total phase was visible in Norway and Sweden, and many astronomers from all parts of Europe traveled to those countries to see the eclipse. Red flames were in evidence, and the fact that they belonged to the Sun and not to the Moon was clearly established.

The first photograph of the solar corona was taken during this solar eclipse and the best observations were made in Scandinavia. Edwin Dunkin wrote:

The prominences were clearly visible, especially a large hooked protuberance. This remarkable stream of hydrogen gas, rendered incandescent while passing through the heated photosphere of the Sun, attracted the attention of nearly all the observers at the different stations.

The best account comes from the great astronomer, John Couch Adams. In 1845, Adams calculated, at the same time as the Frenchman Le Verrier, the position of Neptune. At this time in history, many astronomers had never observed a total eclipse, because they rarely occurred at any given place, and transport facilities were few and far between. In his article that appeared in the Memoirs of the Royal Astronomical Society, Adams' lyrical style conveys the extraordinary emotion of an experienced astronomer who realizes that he is a complete novice in seeing this spectacle for the first time:

The approach of the total eclipse of July 28, 1851, produced in me a strong desire to witness so rare and striking a phenomenon. Not that I had much hope of being able to add anything of scientific importance to the accounts of the many experienced astronomers who were preparing to observe it; for I was not unaware of the difficulty which one not much accustomed to astronomical observation would have in preserving the requisite coolness and command of the attention amid circumstances so novel, where the points of interest are so numerous, and the time allowed for observation is so short.

Adams then describes the magical appearance of the corona:

The appearance of the corona, shining with a cold unEarthly light, made an impression on my mind which can never be effaced, and an involuntary feeling of loneliness and disquietude came upon me ... A party of haymakers, who had been laughing and chatting merrily at their work during the early part of the eclipse, were now seated on the ground, in a group near the telescope, watching what was taking place with the greatest interest, and preserving a profound silence ... A crow was the only animal near me; it seemed quite bewildered, croaking and flying backwards and forwards near the ground in an uncertain manner.

In another written piece, he compares the corona with the luminous halo that painters draw around the heads of saints.