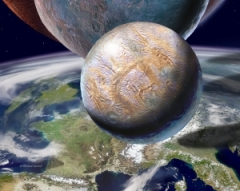 To paraphrase the bumper sticker, it's a big universe out there, but I'd hate to have to paint it. In truth, depicting the planets, nebulae and galaxies is an exciting and inspiring process. The genre of art which seeks to do these things is known as Space Art or Astronomical Art.

With paintbrush, clay or computer, space artists enable us to visit the sparkling ice mountains of Saturn’s moons, the precipitous canyons of Mars, or the thundering volcanoes of Jovian moons on scales that are impossible for humans or spacecraft today.

Early artists had only telescopes and the imagination to inform their astronomical drawing and painting. Now, thanks to astronauts and robot explorers, we've begun to study other worlds in detail. Space art has come of age.

A prime example of our changing view of the cosmos—reflected in art—is that of Mars. Through early telescopes, Mars played host to a web of dark lines and blotches, and snowy polar caps much like the Earth's. Could these caps be made of frozen water? Could Mars' seasonal wave of darkening betray Martian jungles watered by melting polar snows?

Today, rovers and orbiters reveal a world unlike the Moon and hauntingly like the Earth in some locations. Some regions of Mars bear striking resemblance to the desert southwest of the US, the tundra of Iceland, or the deserts of Antarctica. Spacecraft reveal beautiful vistas of chocolate-brown rocks, dunes, dust devils, tan-coloured skies and blue sunsets.

On other worlds, we've found landscapes both mysterious and inspiring, sounding echoes of Earth in many locales. Space artists today travel to the ends of the Earth to study geology that finds its analog in the cosmos.

The International Association of Astronomical Artists is a group of artists dedicated to the accurate and inspiring portrayal of the cosmos. They are constrained by science, but not by imagination. With advanced explorers on the drawing board and en route to distant shores, there will be more fodder for Space Art in years to come!

Michael Carroll's art can be seen at: Stock-Space-Images.com. His book Space Art is available on Amazon.com or at your local bookseller.