Famous Eclipses of the Middle Ages - Part One

Muhammad's Eclipse (632 CE)
The founder of Islam, the prophet Muhammad, was born in Mecca in the Year of the Elephant, CE 569-570. His birth year got its name from an invasion by the Abyssinians, who used elephants in the assault. The army was driven off when birds dropped stones on the troops, causing an epidemic similar to smallpox. The Year of the Elephant was also memorable because of its solar eclipse.

In ancient times, births and deaths of leaders were correlated to celestial omens. However, Islamic theology does not accept that the eclipse was sent by God as an omen of the prophet's birth, a doctrine that is based on another solar eclipse closely tied to Muhammad. His infant son Ibrahim died tragically on January 22, 632 CE. The Sun was eclipsed that day, and some Meccans said it was a sign from God. Muhammad, though, said "The Sun and Moon are signs of God and do not eclipse for the death or birth of any man."

Another solar eclipse related to Muhammad occurred 39 years after his death. In 661 CE, Mu'awiyah became leader of the empire after a revolt against Ali, the son of Muhammad's chief Meccan enemy. Mu'awiyah decided to transfer the prophet's pulpit from Medina to his capital in Damascus, Syria, but as his men were removing it, the sky darkened and stars were visible. It was considered a sign of divine anger, and the relic remained in Medina as a symbol of Mu'awiyah's failure.

The Eclipses of Tatwine and Beda (734 CE)
An Anglo-Saxon Chronicle records that on January 24, 734 CE, "the Moon was as if it had been sprinkled with blood, and Abp. [Abp. denotes "Archbishop"] Tatwine and Beda died and Ecgberht was hallowed bishop." The inference apparently is that the Moon was somehow connected with the deaths of the two ecclesiastics. It is clear from the description of the Moon on that occasion that it exhibited the well-known coppery shade that is a recognisable feature of many lunar eclipses.

European Eclipses (828 CE)
Two lunar eclipses were seen in Europe, the first on July 1, 828 CE, very early in the morning, and the second in the morning of Christmas day. Totality occurred after midnight. The Anglo-Saxon Chronicle thus speaks of the second eclipse: "In this year the Moon was eclipsed on mid-winter's Mass-night, and the same year King Ecgbert subdued the kingdom of the Mercians and all that was South of the Humber." 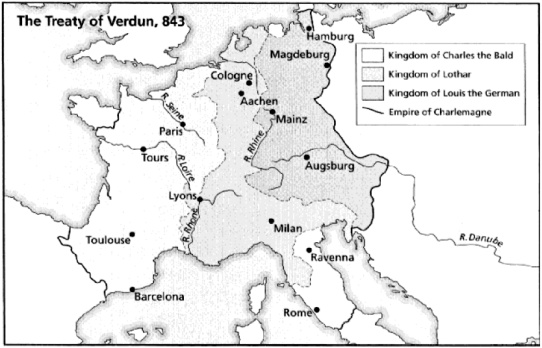 Solar Eclipse of the Emperor Louis (840 CE)
Louis of Bavaria, the son of Charlemagne, was head of a great empire when, on May 5, 840 CE, he witnessed a solar eclipse. He was so petrified that he died just afterwards. His three sons then began to dispute his succession. Their quarrel was settled three years later with the Treaty of Verdun, dividing Europe into three large areas, namely France, Germany and Italy.