The Season of the Comets 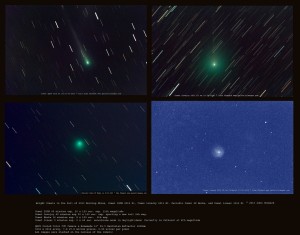 For about a year now we’ve been hearing about the approaching comet known as C/2012 S1, or ISON, and how it’s going to be a stunner come late November. As Comet ISON has closed the distance with us, it hasn’t quite brightened on the steep curve many were hoping for, but even so it’s still too soon to know just what kind of a show it will put on at perihelion. Look before dawn until the last days of November, when you can start searching after sunset as it whips around the Sun. If you have a telescope, you can track the comet now and watch as it brightens. But ISON is not the only comet currently visible through amateur telescopes.

Comet Linear 2012 X1 recently underwent an outburst (much like Comet Holmes in 2007) and has brightened to 8th magnitude. The coma of the comet is expanding, creating a giant fuzzy cocoon. When Comet Holmes expanded during its outburst it grew so huge that its diameter became larger than the Sun. Whether Comet Linear will release the same amount of gas and dust to bloat it like a solar system giant is yet to be seen. Comet Linear is in Coma Berenices and heading toward Bootes and its distinctively bright star Arcturus in the west. Try looking for it in the morning about an hour before sunrise. By mid-November, Comet ISON and Comet Linear will be fairly close in the sky, with Comet ISON to the right in Virgo.

Yet another comet, also in Virgo and even closer to Comet Linear, is Comet 2P Encke. Comet Encke is a periodic comet that is making a close approach and brightening to 8th magnitude for this appearance. On November 1, Comet Encke and Comet Linear are equidistant from the horizon in the east before sunrise.

The last comet is Comet Lovejoy 2013 R1, at 9th magnitude, which is a bit more of a challenge to spot. It may yet brighten to 8th magnitude and become easier for smaller telescope owners. It will pass to the right of the Big Dipper in the last half of November.

On November 17, Comets Linear, Encke, and ISON will all be near brighter objects before sunrise. Use these easier-to-spot targets to help you locate the comets. Look east and find Comet Linear just to the left of Arcturus. Comet Encke will be just to the right of Mercury, and Comet ISON will be a little above Spica. On November 18 the objects are all still close together but ISON will be below Spica. Encke and ISON have their own pairing around November 24.