« Closest Stars to the Sun

Perseid Meteorite blazing across the sky 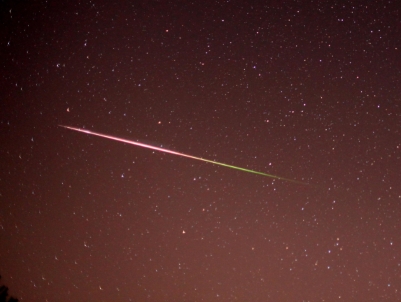 August’s Perseid meteor shower was a good one and testament to that is this great photograph of a Perseid meteorite from 12 August 2015. It was taken by amateur astrophotographer Andrew Davidhazy at 10:30pm EST from a location near Rochester in New York state, USA.

The photo was taken with a Canon 5D Mark II (on a tripod) which had been set up to take 15 second long exposures with a 50mm lens at a large lens opening (f/2) and high sensor speed (of 2000). Notwithstanding the light pollution that there was to contend with,

we’re sure you’ll agree that this is a fine shot. More of Davidhazy’s science related photography can be found over at his personal website.

Hope everyone else out there had a great observing session for this year’s Perseids!

Fantastic information on the Quantum gamma ray graviton related article unfortunately i Sony know when It was published when you have a serious article about the speed of gravity let me know (one that considers faster than light without considering it to be infinite).thank you