« Losing the Comet but Winning the Ring
My Observing Wish List » 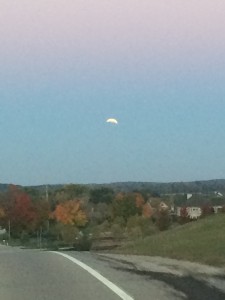 A Partial Lunar Eclipse during Moonset

The total lunar eclipse was going to occur from about 5:30 to 6:30 on Wednesday morning. My alarm was set for 6:00, like usual, and the forecast was for perfectly clear skies.

I was awake fifteen minutes before my alarm but patiently waited until six o’clock, because the only upstairs windows that face west where the eclipsed Moon was setting are in my children’s bedrooms. I was not awake enough to go downstairs nor mean enough to wake them unnecessarily early. At 6:00 I walked into my son’s bedroom and raised his blinds, like I do every morning to wake him. This has become less effectual as the school year draws on and it’s still dark in the morning. This morning there wouldn’t even be moonlight to wake him, as the fully eclipsed Moon was shining dimly with a gray pallor.

Where I live, the eclipse wasn’t the red “Blood Moon” that was so widely touted. Lunar eclipses often have a reddish tinge, some years more than others depending on what particles are in the air. This eclipse was more simply a dimming of the Moon’s light as our shadow fell across it.

I directed my son to have a look and then went down to get out my good camera to get some shots. Unfortunately, the battery was dead. I took some very mediocre pictures through my iPhone and then woke my daughter so that she could also see the full lunar eclipse. Even though she normally gets to sleep until 7:00, she made a special request to be woken to see the eclipse. She also has a standing order that I must wake her if I ever see the Northern Lights.

After about half an hour from when we started watching, the upper right corner of the Moon (from my location, reverse for those who were watching from “Down Under”) began to brighten and brighten until it was obvious the sun was shining upon the lunar surface once again. My son took some photos out the car window as I drove him to school, where all the other early risers got to join us in a pretty view as the partially eclipsed Moon set in the west. The eclipsed Moon settled into the dark blue band along the horizon. This blue band is also an effect caused by Earth’s shadow, only this time it is cast upon Earth’s atmosphere as the Sun rises on the other side of the sky. The pink hue in the sky above Earth’s shadow is known as the Belt of Venus.

The next eclipse is a partial solar eclipse on October 23, which will grace much of the same areas that got to see this lunar eclipse. I’ll be sure to have my camera charged this time.