Here's a tricky question for astronomers everywhere: What's the 17th brightest star in the sky?

The answer (if you hadn't guessed it from the title of the article!) is Fomalhaut, known also, rather curiously, as the 'First Frog' or alternatively 'The Lonely One'. It lies in the constellation of the Southern Fish (Pisces Austrinus), which actually looks like a stylistic fish lying on its back drinking in the waters of knowledge from Aquarius. 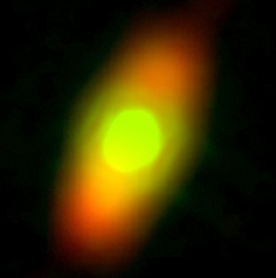 Fomalhaut is a bluish white star, younger than our Sun and is located about 25 light-years away. It's surrounded by a warped disk formed from icy dust particles similar to that around Vega, Beta Pictoris and Denebola.

Fomalhaut may hold secrets of a forming planetary system, its dusty ring is similar to the disk generated by the Solar System's Edgeworth-Kuiper Belt.

So where did this star get its name and how do you pronounce it? Well, 'FUM-al-HUT' in Arabic means fish's mouth, and I am told it is pronounced 'foma-low' in English. This makes it easy for me to remember since Fomalhaut hangs low in the south autumn sky.

Another K5 dwarf star known as LTT8273 may be an optical companion. This particular star is originally thought to be a member of a now dispersed star cluster including Fomalhaut, Vega and Castor. Fomalhaut's future may entail evolving into a white dwarf in a billion years. (Don’t wait up!)

Has Fomalhaut's dusty disk coalesced into planets around the star? Theories point to this possibility. Rumour also has it that our Solar System may have looked like Fomalhaut's dusty system four billion years ago. I think you will enjoy observing this star - it's more than just a small glimmer in the southern sky.