Sirius also has a companion star, known as Sirius B. Sirius B was the first 'white dwarf' to be discovered. 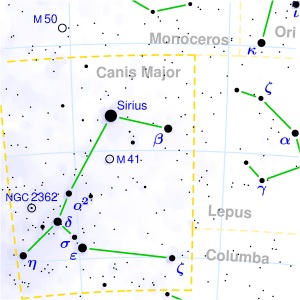 South of Sirius, the open cluster M41 can be found. Like all open clusters, it contains a few hundred young stars and has no particular shape.

Together the stars are just bright enough to be seen with the naked eye on a clear night with no moon. With binoculars they appear as a faint smudge, and in a telescope the cluster is easily seen, covering about as much sky as the full moon does.

The cluster appears low in the sky from northern latitudes and light pollution reduces the splendor of this cluster, but it's still worth a look.